Wins and podiums keep i20 R5 crews in title contention 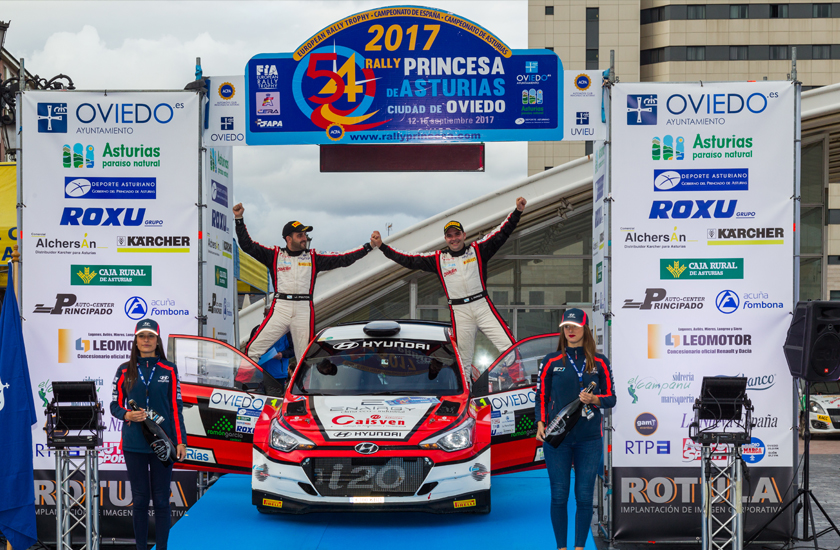 Wins and podiums keep i20 R5 crews in title contention

Hyundai Motorsport customer teams continue to chase titles in national championships around Europe. While one team took a big step forwards, strengthening their points’ lead, other customers closed in on the front-runners with a number of strong results.

Iván Ares and José Pintor extended their margin at the top of the Spanish tarmac rally championship, with a second consecutive victory in their New Generation i20 R5, as the series returned from its summer break for the Rally Princesa de Asturias (September 15-16). The event began in difficult conditions, with the roads around the rally’s base in Oviedo treacherously wet. However, despite being first on the road, Ares navigated the opening stages, avoiding the dangers of aquaplaning that caught his closest rival out.

The Galician driver quickly established himself at the front of the event, topping five stages over the weekend, winning overall by nearly 40 seconds to increase his lead in the championship to 53.4 points with four rounds remaining in the season. Surhayen Pernía and Carlos del Barrio doubled the podium celebrations for Hyundai Motorsport customer teams. The Hyundai Canaries supported crew, who took podium results at both the Rally Cristian López Herrero and Rallysprint Valle de Laciana during the summer pause, finished third overall. They also scooped the bonus points on offer for winning the TC Plus stage, which begun the second day of competition.

High points in the Alps

Two weeks on from taking overall victory at the Rallye des Alpes du Mont Blanc (September 1-2) Italian driver Elwis Chentre returned to the mountainous stages in his Promo Racing run New Generation i20 R5. At the Rally Valli Cuneesi  (September 15-16) he joined a full entry list headed by a quartet of former WRC cars, as well as the regulars of Swiss national championship, for whom the trip to north-western Italy marked the penultimate event of the year. As a former winner of the event Chentre did have local knowledge to his advantage. Finishing the first stage as the fastest of the R5 entrants he proved his pace throughout the weekend, finally finishing third overall.

Elsewhere in Italy there was a third place overall on the Rally di Pico (September 15-16) for Brunero Guarducci and the Friulmotor team. Running in the regional event taking place alongside the European championship’s Rally di Roma Capitale he recovered from a slow time on the opening super special by setting top-three times in all of the remaining stages to climb the order.

The previous weekend Friulmotor team owner Claudio de Cecco had enjoyed his own podium celebration at the Rally Nova Gorica (September 8-9) in Slovenia. Running in the national championship with the support of Hyundai Slovenia the result moved the Italian and his co-driver Jean Campeis up to second in the points’ standings, closing in on the leaders.

There was also success for German René Mandel in his first appearance in a New Generation i20 R5. The Hyundai Motorsport Driver development Program (HMDP) candidate took the Sarrazin Motorsport owned chassis to the ADAC Rallye Niedersachsen (September 8-9). He won five of the 13 stages, narrowly missing out on victory as he finished second overall. Now third in the championship standings, he further boosted his points tally by taking maximum points from the event’s Power Stage.

A strong weekend for New Generation i20 R5 teams was completed by Jesse Turunen in Finland. Backed by Hyundai Finland he and his Rallybaron team continued their campaign in the national championship at the SM Oili Jalonen Ralli (September 8-9). Despite Turunen taking his first ever overall stage win, the young driver was robbed of a chance to contend for the victory by a puncture with two stages remaining, instead finishing in sixth position.

With customer teams fighting at the front of several championships as the season enters its final months the Hyundai Motorsport Customer Racing department continue to improve the New Generation i20 R5. Andreas Mikkelsen was the latest driver to lend his talents to the development of the car, getting behind the wheel for two days on gravel in France. Bringing his experience of other manufacturer’s R5 offerings the feedback from the Norwegian was sought by the Customer Racing department following his confirmation as part of Hyundai Motorsport’s WRC driver line-up for the last three events of the season.

Hyundai Motorsport Customer Racing department manager Andrea Adamo said: “Our customers have had a very successful few weeks as they chase titles in their national championships. A second consecutive victory in Spain puts Iván Ares in a strong position in the points’ standings, proving the competitiveness and reliability of the New Generation i20 R5. At this important stage of our customers’ seasons it is important that we continue to work to develop the car. Thanks to his running in WRC2 earlier this season Andreas Mikkelsen has a great deal of experience in current R5 machinery. With his input we can continue to improve the i20 R5 for new customers, and pass on improvements to our existing clients to keep them at the front.”