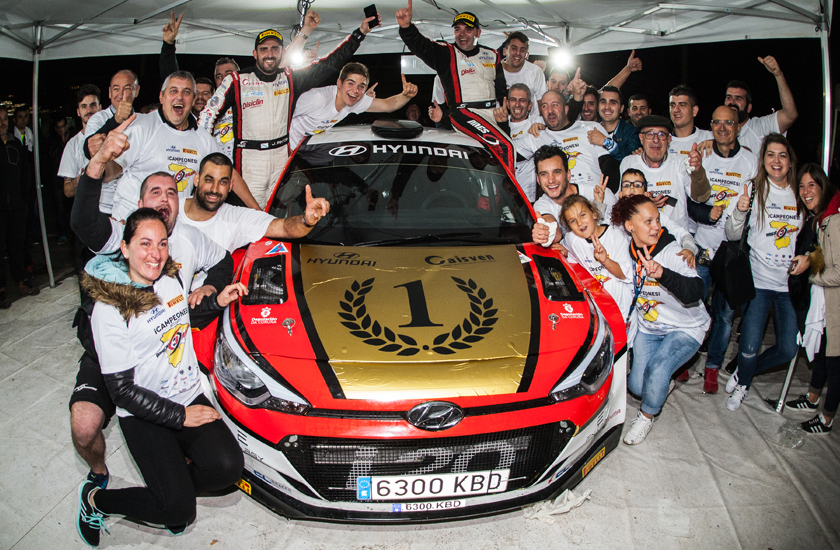 New Generation i20 R5 crew Iván Ares and José Pintor accomplished their season long goal last weekend. With victory at the Rallye Santander Cantabria (October 20-21), their fourth of the season, the pair officially clinched their first title in the Spanish tarmac championship.

Their success was also all the more incredible, as it comes with two events still to contest. However, the result highlighted the pair’s consistency, which has helped them not only win half of the events so far this season, but also finish on the podium at every rally they have started with the car. Their victory at the latest event came despite a ten second penalty incurred during the morning. Over the course of the afternoon the pair overcame the deficit, re-taking the lead on the penultimate stage and capping off the performance with a dominant showing, winning the 16km finale by nearly 30 seconds.

They also claimed maximum points from the weekend’s TC Plus Power Stage. Their success, however, came at the expense of fellow New Generation i20 R5 pairing Surhayen Pernía and Carlos de Barrio. The Hyundai Canaries supported pair led the rally into the section, however, they drifted wide through a fast right hander early in the stage, damaging their car against a wall and ending their challenge for a third consecutive podium.

A title awaits in France?

French New Generation i20 R5 crew Jordan Berfa and Damien Augustin await a title deciding round in the French gravel championship next month. The pair lead the championship overall following a fine overall podium at the most recent round, the Rallye Terre des Cardabelles (October 7-8).

The result was their second overall podium of the year in series, where they compete against crews in former WRC machinery for the top times, and came courtesy of a late surge up the order. The Turbo ABP Competition run team was second fastest on the penultimate test, and then won the final stage. In doing so they rose from fifth to third overall, crucially stretching their lead in the overall standings over their nearest competitor, who competes in a different class within the championship.  However, their position at the head of the points owes just as much to their form against their fellow R5 competitors, having now won the R5 class in three out of the six events contested in the championship to date.

Podium finishes in Germany and Italy

Hyundai Motorsport customers are able to challenge for podiums in national championships across Europe with the New Generation i20 R5. In a rare start with his family-run car Hermann Gassner Jr. was able to match  and beat  the pace of the regulars in the German rally championship. At the 3-Städte Rallye (October 20-21), the final round of the season Gassner Jr. and co-driver Ursula Mayrhofer won a pair of stages  their first in the national championship  to secure third overall at the end of the tarmac event.

His result was almost matched in Italy by Elwis Chentre at the Rally Due Valli (October 13-15). Making his first start in the Italian national championship in Promo Racing’s New Generation i20 R5 since April Chentre and co-driver Igor D’Herin claimed a fine fourth overall in the rally, securing seventh in the championship standings, despite only have entered three of the season’s eight events.

The number of New Generation i20 R5 crews continues to grow as teams increasingly turn their attention to their 2018 campaign. The newest driver to join the list of Hyundai Motorsport customers is Bob de Jong. The Dutchman gave his brand new car a first competitive start at the Twente Rally (October 22) alongside Bjorn Degandt, taking second overall in the final round of the Dutch championship.

Hyundai Motorsport Customer Racing manager Andrea Adamo said: “First, we have to give our congratulations to Iván Ares and José Pintor on their championship win. With their title they have proved that the New Generation i20 R5 has both the pace and reliability to compete at the top of a championship for not only a single rally, but across a whole season. With another customer team leading in a gravel championship it shows that the car can deliver victories on multiple surfaces. Teams are now turning attention to their 2018 campaigns. At the wheel of a New Generation i20 R5 they will be able to compete for podiums and victories, not only on individual events, but across the entire season.”