i20 R5 Trophy awarded at Monza 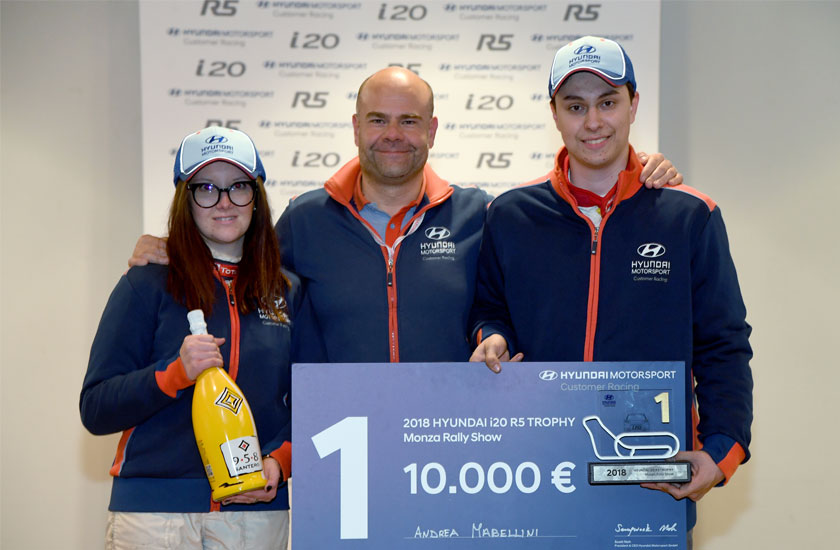 The scene was set for a thrilling end-of-season encounter at Monza Rally Show, as six of our customers contested the inaugural Hyundai i20 R5 Trophy at the iconic Autodromo di Monza in Italy (December 7-9).

While Andrea Mabellini and co-driver Virginia Lenzi took Trophy honours and the 10,000 prize fund, there was also success for fellow i20 R5 crew Luca Rossetti and Andrea Minchella, who claimed the R5 class victory at the popular event.

The Trophy competition, which drew to a close a successful season for our rally customers around Europe, took place within the three-day event. The opportunity attracted considerable interest from teams, with Bernini Rally and HMI each running two cars, while Friulmotor and Promo Racing fielded a single entry.

They were amongst the fastest of the R5 competitors throughout the weekend on stages that tested both the top speed of the car and the agility of the chassis through tight, temporary chicanes and hairpins.

For Luca Rossetti, the victory was a second accolade at the wheel of an i20 R5, having ended the Italian national championship with a stunning overall victory at the Rally Due Valli. The finish also re-affirmed Andrea Mabellini’s form following his fourth overall, and R5 class win, last month at the Special Rally Circuit.

“The i20 R5 has had a very successful season with rally victories around Europe,” said our Customer Racing Deputy General Manager Andrea. “The Trophy was an opportunity to bring some of our customers together, with a chance to compete directly against one another, as well as the rest of the field at the Monza Rally Show. It was a great a weekend, and to have an i20 R5 win the class was the best possible way to complete the competitive season. Hopefully it is a preview of further success in 2019.”