R5 and TCR drivers from around Europe rewarded 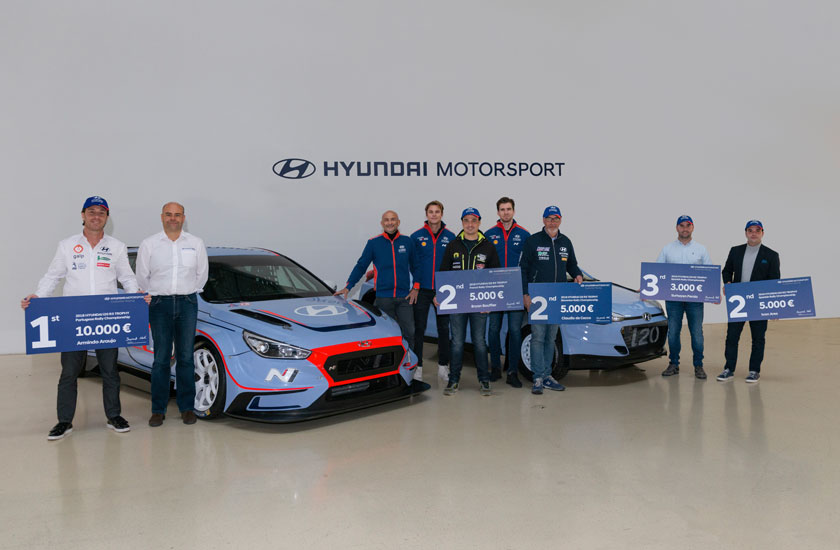 R5 and TCR drivers from around Europe rewarded

Customers from across Europe have attended our headquarters in Alzenau for a special prize-giving event to commemorate their successful seasons.

As reward for finishing in the top-three of their respective series, drivers were presented with cash prizes; the champions took 10,000, runners-up 5,000 and third place 3,000.

Among those in attendance were Portuguese driver Armindo Araújo, who secured the Portuguese rally championship title for Team Hyundai Portugal. He was joined by fellow i20 R5 drivers Bryan Bouffier, Iván Ares, Surhayen Pernía and Claudio de Cecco, thanks to their finishes in national championships around Europe.

Iván finished on the podium in ten out of the 11 rounds of the Spanish Rally Championship in his i20 R5 supported by Hyundai Spain to finish second in the points’ standings. Surhayen, meanwhile, finished third as Hyundai also clinched the manufacturers’ title.

In France, Bryan racked up four wins over the course of the season to take second place in the overall standings. For the second consecutive season Claudio finished second in the after a campaign supported by Hyundai Slovenia.

Other drivers eligible for trophy but unable to attend the event included TCR Korea winner Byung-Hui Kang and Diego Dominguez.

The presentation was also attended by our Norwegian WRC crew Andreas and Anders, as well as FIA WTCR winner* Gabriele, who were on hand to congratulate the successful drivers.

The presentations are the first of two events that close the year for our customers, the second of which will come with an i20 R5 Trophy event at the popular Monza Rally Show.

Andrea said: “2018 has been a very busy year for our customers, with the first Hyundai i30 N TCR teams joining the Hyundai i20 R5 crews in competition around the world. To be able to bring together so many of our successful customers for this presentation is a great reward, both for them, and hopefully for the whole Customer Racing department.”