Title success to close the season 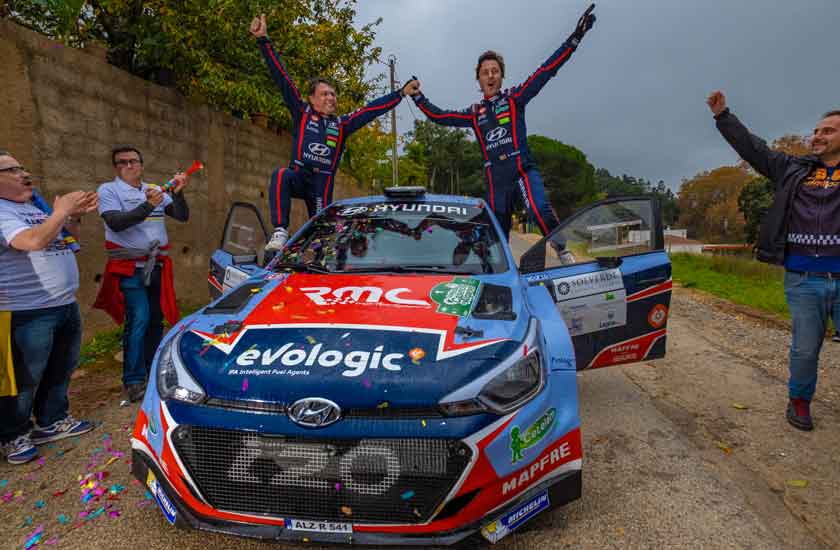 Title success to close the season

Crews competing with our i20 R5 have enjoyed a competitive conclusion to their 2018 season with title success in Portugal leading the accolades.

Armindo Araújo and Luis Ramalho lifted the Portuguese Rally Championship crown with their fourth win of the year at Rallye Casinos do Algarve (November 16-17).

The Team Hyundai Portugal squad, part of a two-car Hyundai effort in the national championship, ended their season in style, taking overall victory in the rally by 12.8 seconds.

Seconds out in Spain

Iván Ares and co-driver José Pintor finished second in the final standings, thanks to back-to-back second places which brought their podium total for the year to ten.

The final round of the season was won in dominant fashion by José Antonio Suárez and Candido Carrera in their i20 R5, their fourth win of the campaign. The result also confirmed Hyundai as manufacturers’ champions in the series for 2018.

Pace and podium in France

Six i20 R5 customers started Rallye du Var (November 23-25), the final round of the French tarmac rally championship. Stéphane Sarrazin and Bryan Bouffier put themselves in the fight for the major positions, ending the middle day of competition in second and third respectively.

That same pace remained with them on the final day, with both men making up time on the overall leader. Stéphane took victory on the penultimate run but on the final stage, the longest of the rally at 32km, he suffered a puncture which dropped him down to sixth overall.

Bryan was subsequently promoted to second overall, which saw him also take the runner-up position in the championship despite having missed a round earlier in the season.

Narrowly missing out in Paraguay

Diego Dominguez completed the rally season in Paraguay second in the standings following the final round the championship at the Rally de Carapegua (November 3-4). Entering the final round within reach of the national crown Diego and co-driver Edgardo Galindo made the perfect start to the weekend, with the fastest time in shakedown in the Hyundai Paraguay supported i20 R5.

However, their 2018 season, which includes four national victories  among them the grueling Transchaco Rally  came to a disappointing end before the opening stage. A minor technical problem could not be fixed ahead of the rally, forcing the duo to forfeit their challenge on the event.

Our Customer Racing Deputy General Manager Andrea Adamo said: “2018 has been a successful season for our customers in the Hyundai i20 R5. In Portugal and Spain, we have seen all year both pace and reliability of the i20 R5 in the hands of a number of crews, and that performance has brought just reward in securing the drivers’ title in Portugal and the manufacturers’ championship in Spain.”