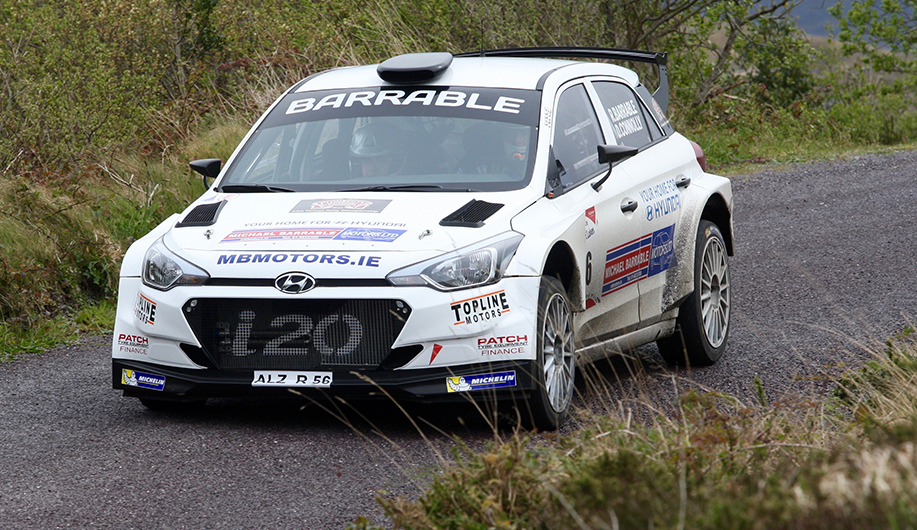 As the 2017 rally season continues Hyundai Motorsport customers have taken the New Generation i20 R5 to new championships and countries in search of victory.

Among these debuts, one of the most notable came last weekend (April 28-30) when Guillaume Dilley gave the i20 R5 its first customer outing of the year in the Belgian championship. For Dilley, who claimed the first ever overall victory for the New Generation i20 R5 at the end of 2016, it was a return to action in the car. However, back at the wheel of his Hyundai for the Rallye de Wallonie he and co-driver André Leyh set a string of top-five times, including the best time on the 11th of the rally’s 25 stages. The pair claimed fourth overall and though they were frustrated to have missed out on the podium by just half a second the result was still their best ever overall result in the championship, and a signal of intent for the remainder of the season.

The same weekend, Irishman Robert Barrable showed the pace of the New Generation i20 R5 in the third round of the Irish Tarmac Rally Championship at the International Rally of the Lakes, based in Killarney. Just as he had done at last month’s West Cork International Rally the Dublin-based driver quickly established himself amongst the leaders. Four times Robert and his co-driver Damien Connolly set the fastest stage time overall  not only outpacing the other R5 teams, but also those crews driving WRC cars. The fastest R5 crew on another two occasions across the two-day event, the pair finished second overall.

At the start of April (April 1-2) at the Rallye Terre des Causses Jordan Berfa had also been able to match the times of crews driving WRC-spec machinery. Making his first start at the wheel of a New Generation i20 R5 run by Turbo APB Competition in the opening round of the French gravel championship he and Damien Augustin finished fifth overall, the second best of the R5 runners. Jordan was back at the wheel of the car, this time on tarmac, at the Rallye National Val d’Agout, part of the France Cup competition. Though he dominated the event, it was not a totally smooth weekend for the team. Leading by 25 seconds going into the final stage on Saturday a puncture lost him more than 40 seconds. However, on Sunday he was by far the fastest driver, bouncing back to the lead and going on to win by nearly two minutes.

Last month also included the first two rounds of the Hungarian national championship, with two Hyundai customers in contention. At the season opening Miskolc Rallye (March 31-April 2) it was Lovász Pal and his LP Winner team that were the best placed Hyundai, finishing 12th while Korda Racing’s crew of Ádám Velenczei and Csaba Szed? was forced to retire from a position in the top eight on Sunday morning. Happily he enjoyed much better fortunes on the very fast Steelvent Ózd Rallye (April 29-30) where average speeds approached 125km/h. Despite collecting a ten second penalty for arriving a minute late at a timing control Velenczei and Szed? fought for a podium position for the duration of the event, taking third position on the final stage. Pal, likewise enjoyed a better weekend at the second round of the championship, taking a top ten overall alongside co-driver Tamás Kürti.

The first weekend of April was the busiest weekend so far for New Generation i20 R5 teams. As well as the events in France and Hungary customers were also in action at Rallye Sanremo, where Elwis Chentre continued his strong start to the Italian championship season with fifth position on the highly technical stages, in his car run by Promo Racing.

On the single day Leggenda rally, which ran on some of the same stages, Turkish driver Burak Cukurova challenged for overall victory, in his Friulmotor entry. April was a busy month for the team, with their i20 R5 competing at three events during the month, also contesting the Liburna Terra gravel event and the Rally della Valdinievole, where Brunero Guarducci finished fifth overall. The Italian squad is due to take delivery of their second chassis later this week, such is the demand from their clients for the car.

While Sorin Badea and Bernini Rally became the first team to run an i20 R5 in Romania, the most important of the weekend’s debuts were arguably made by Eddy Abou-Karam and Manuel Castro.

In very wet conditions at the Spring Rally Lebanese driver Abou-Karam finished fifth in his first event with his car, the first for a Hyundai Motorsport customer outside of Europe. Meanwhile, Castro returned the New Generation i20 R5 to the European Rally Championship (ERC), the series where it made its public debut in June 2016. On a very challenging Azores Airlines Rallye, which caught out some of the top European runners Castro recovered from an early scare when the bonnet flew open mid-stage to finish 14th overall. More importantly, he was sixth of the runners entered for the Portuguese championship, where his main focus lies this season.

At the ADAC Hessen Rallye Vogelsberg Daniel Chwist made a first start in his New Generation i20 R5, finishing 12th overall. The same weekend (April 7-8) at the Lavanttal Rallye in Austria Günther Lichtenegger made his first start in a decade in an i20 R5 run by Gassner Motorsport. Despite his time out of competition and more than a minute’s worth of penalties he finished the event inside of the top ten overall.

Hyundai Motorsport Customer Racing Manager Andrea Adamo said: “The number of championships that include Hyundai Motorsport customers continues to grow, and we have now seen New Generation i20 R5 in some very important and strong championships. They have shown that the car is capable of running at the very front of some tough national championships, with great podium results in France, Ireland and Hungary and strong performances from teams across Europe, including in the ERC, which is obviously an important championship for R5-specification machinery. That we have such a range of crews, from gentlemen drivers all the way up to promising young drivers able to set competitive times is a credit not only to them, but also to the car.”