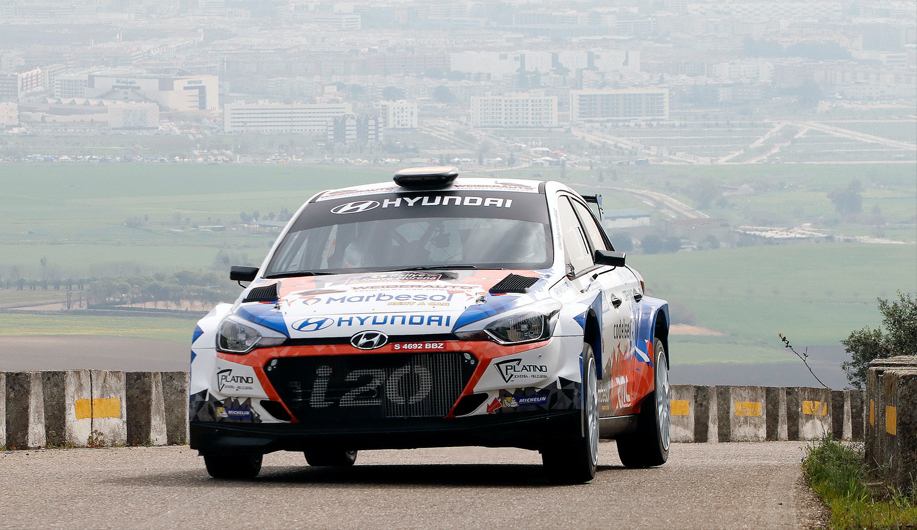 With the domestic rally seasons now underway in countries across Europe many of Hyundai Motorsport’s customers have been competing for the first time their in New Generation i20 R5.

Hyundai Motorsport customers got off to a very strong start in the Spanish tarmac rally championship. In arguably the most competitive opening of the championship for many years two New Generation i20 R5 crews combined to win seven of the ten stages on the Rallye Sierra Morena (17-18 March) and fought throughout for overall victory. Making his R5 debut having switched from a rear-wheel drive Porsche 997 over the winter Iván Ares claimed three of those top times, and finished third overall with co-driver José Antonio Pintor.

At the same event Surhayen Pernia and Victor Perez, who are supported by the Hyundai distributor for the Canary Islands, went one better. Making their own R5 debut after competing last year in an R3 car They got off to a flying start with the new machine. They won the opening two stages and led the rally overnight, taking the first championship points of the season in the process. On the second day the crew would take another two stage wins, but narrowly missed out on making a winning start to the season, finishing second behind the defending series champion.

That same weekend Dublin-based driver Robert Barrable gave their New Generation i20 R5 its first outing in Ireland. Working with Italian team Friulmotor, and the support of engineers from the Hyundai Motorsport Customer Racing department Barrable, who has just returned to rallying after a two-year break, quickly adapted the car to the unique demands of the Irish roads. This showed immediately at the start of the West Cork Rally, the second round of the Irish Tarmac Rally Championship.

Barrable was the fastest R5 entrant on the very first stage, and held a place in the top three overall until almost within sight of the finish. Unfortunately, Barrable and co-driver Damien Connolly suffered a puncture which dropped them down the order, before minor damage to the brake disc stopped them from going any further, unwilling to risk further damage to the brand new car.

Earlier in the year at the Ronde della Val Merula (4 February) Elwis Chentre and Fulvio Florean had taken an overall podium, as they made their first start in a New Generation i20 R5 run by Promo Racing. The crew and team entered the single day event in preparation for the first round of the Italian national championship, the Rally de Ciocco e Valle del Serchio (March 17-19). As part of a very competitive R5 entry at the rally both the Promo crew and the Bernini Rally team of Gabriele Ciavarella and Giuliano Manfredi ran in the top ten throughout a long opening day.

Sixth overall to start Sunday’s stages ‘Ciava’, would ultimately be one of those who retired from the rally, alongside two of the favourites for the event and the championship title. Chentre, meanwhile, was able to take advantage of their misfortune, finishing the weekend with a strong run of competitive stage times to take fourth overall.

Teams also gave their New Generation i20 R5 debuts on gravel and snow rallies. Manuel Castro, was the first customer to take on the gravel stages at the Ralli Serras de Fafe (18-19 February). Castro gave the car a strong showing on the loose surface. However, damage to the radiator on the opening day forced him out of contention for a top-five finish.

With support of Hyundai Finland promising young Finnish driver Jesse Turunen and co-driver Kari Kallio swapped to a New Generation i20 R5 for the Tahko SM Ralli (11 March), the third, and final, snow rally of the Finnish national championship season. On fast and flowing roads typical of rallies in the country Turunen, in his first competition in an R5 car, proved very competitive against the more experienced crews in the rally. Threading between the snow banks he recorded top five stage times throughout the event he finished fifth in the top class of the championship, where a total of 25 crews were entered.

Hyundai Motorsport Customer Racing department manager Andrea Adamo said: “It’s great to see teams and drivers taking the New Generation i20 R5 to compete in some of the toughest national championships across Europe. We have seen already that they are able to fight for stage and overall victories. Obviously to have two teams on the podium in Spain to start the season is very impressive, especially with both drivers being new the R5 regulations. However, our customers have shown how quick the car is across Europe on a range of surfaces; the unique tarmac roads in Ireland to the gravel in Portugal and the snow and ice in Finland. With our engineers we now have to work with our customers, so they can continue to challenge all season.”